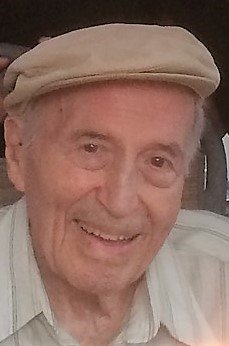 Dominick A. Robertella of 89 Mohr Ave, Bloomfield, NJ, passed away peacefully, surrounded by his children on 2/8/2018. “Nicky,” as he was called by his family and friends, was a World War II Veteran and served under General George Patton in the “Battle of the Bulge” campaign as an army ranger and engineer. During his service to his country, he married the love of his life, Dorothy Librizzi, of Newark. They moved to Bloomfield, NJ in 1958, where they raised their three children – Carolyn, Donald, and Ricky. Dominick worked as a machinist for Walter Kidde and worked there with excellence for 42 years until he retired from his work in 1985. He resided in his home on 89 Mohr Ave, from retirement until his passing.

Friends and family may visit on Sunday, February 11th, 2018, from 2 to 8pm at Halpin-Bitecola Brookdale Funeral Home, 1284 Broad St in Bloomfield. A mass of Christian burial will be held at 9am on February 12th, 2018, at St. Thomas the Apostle Church in Bloomfield, with entombment to follow at Holy Cross Cemetery in North Arlington.

To order memorial trees or send flowers to the family in memory of Dominick Anthony Robertella, please visit our flower store.