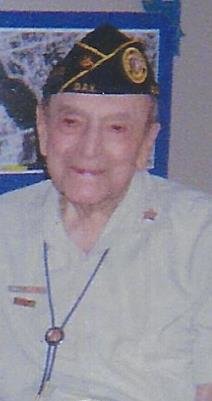 G.Armando “Al” Formica, of Bloomfield, passed away Friday, August 5, 2016. He was 101. Al was born in Newark, was a loving father, and enjoyed fishing Al served his country honorably in WWII, and fought in the Omaha Beach sector of the Normandy D-Day invasion. He helped liberate the Buchenwald Concentration Camp in Germany. Al was wounded while serving and received many medals. Al is reunited in heaven with his wife of 73 years, Anna, who passed away this past January. He leaves behind his children Roberta Kresky, and Armand Formica and his wife Sharon. Al was a gold star parent to a son Gary P. Formica, who died in combat in the Vietnam War. Al also leaves behind six grandchildren, Anthony, Tiffany (Kresky), Michelle Kresky-Jordan, Debra, Michael (Formica), and Kimberly Barone, as well eight great grandchildren. He was also pre-deceased by a great grandchild. Visitation will be held on Sunday, August 7th, from 7:00-9:00 pm at Halpin-Bitecola Brookdale Funeral & Cremation Service, 1284 Broad St. in Bloomfield, N.J. A funeral mass will be celebrated at 9:00 am on Monday August 8th, at St. Thomas the Apostle Church in Bloomfield, 60 Byrd Ave, in Bloomfield.
To order memorial trees or send flowers to the family in memory of G Armando Formica, please visit our flower store.