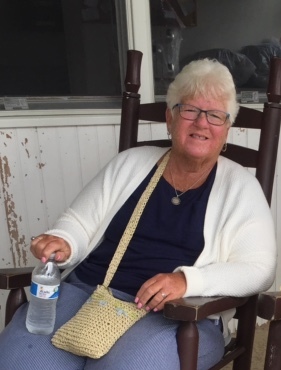 Kathleen (Kathy) Ann Schnupp Beloved wife, mother, sister, aunt, niece, cousin, neighbor, and friend. Kathy was predeceased by her husband of 31 years, Jerome (Jerry). Kathy's children, Michael James and Patricia Ann, were the light of her life. Kathy was born in Newark, New Jersey and met her husband down at the Jersey Shore in Belmar. Kathy moved to New York City after marrying Jerry, a Lieutenant in the NYPD. She dedicated herself to motherhood and made lifelong friends in New York. Kathy was the third of seven children, and she loved spending time with her siblings, Alice Raposo (nee Hamilton), William Hamilton, Patty Herrmann (nee Hamilton), Betty Hamilton, Robert Hamilton, and her nieces and nephews, especially in her beloved second home, Belmar, New Jersey. Kathy was informally known as the 'Mayor' as she was friends with pretty much everyone who ever spent any time on 19th Avenue. She ruled from her perch on the porch and the backyard will never be the same without her. Kathy is now home in heaven with her parents, William and Mary Hamilton, sister Mary Polacco (nee Hamilton), and her husband, Jerry. While Kathy might be gone, she will live on forever in the hearts of her family and friends. Masks and social distancing rules will apply.
To order memorial trees or send flowers to the family in memory of Kathleen Ann Schnupp, please visit our flower store.