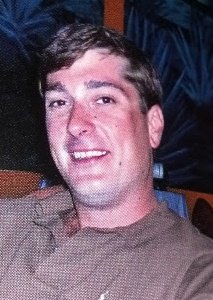 Michael (Mikey, Wolf) Douglass passed away suddenly on Wednesday, August 19, 2015 at the age of 40. Born in Livingston, NJ and raised in Glen Ridge, NJ. He had many life long friends in the neighborhood that throughout his life considered all of them his brothers, with fond memories of little league baseball and considered Carteret Park his second home. Michael was a landscaper for many years with his good friend George J. Kilgen. He is survived by his father Harry L. Douglass, his mother Irene (Krepel) Douglass, and the love of his life for the past seven years Tracy Lyn Caggiano. He was predeceased by his sister Theresa Anne Douglass who was born February 2, 1973 and passed February 8, 1973. He is also survived by his half brothers, Barry L. Douglass of South Carolina, Frederick Douglass of North Carolina, and nieces and nephews. Michael graduated from Glen Ridge High School and attended Quinnipiac University in Hamden, CT. He was a lover of all sports but his passion was ice hockey and attended Philips Exeter Academy in New Hampshire where he found his love for the game. He was an avid NY Yankees lover until he started watching the NY Mets while visiting his parents and became a true NY Met fan. Michael always looked forward to his visits with his parents at their Lake house in PA where he was able to love and appreciate the tranquility and had a huge passion for photographing exceptional sunsets. He had an incredible talent for writing poetry, an avid reader, a true lover of all genres of music, especially Jerry Garcia and the Grateful Dead. He had a very strong affection for all animals and could not tolerate any mistreatment of God's creatures. Michael always thought of other people and put their needs first he would drop anything at anytime to aid a friend or a stranger. He especially loved children and through his example taught them to be good and respectful while letting them be silly and enjoying their childhoods. He especially adored Tracy's nieces and nephews and considered them his own. His true devotion for his Tracy gave him the happiest and most fulfilling years of his life. Tracy was his everything and Tracy always said she never had to compete with anyone for Michael's love but may have come second to food. The love and respect that Michael had for his parents was immeasurable, he will never be forgotten. He was one of a kind and a great man and his loss will FOREVER affect us but knowing that Michael will take care of us all from up above will be an eternal comfort. We love you Michael!
To order memorial trees or send flowers to the family in memory of Michael Joseph Douglass, please visit our flower store.